+2
When a rule chain scheduled rule runs, the execution log does not contain the Action results the way a manual run does. 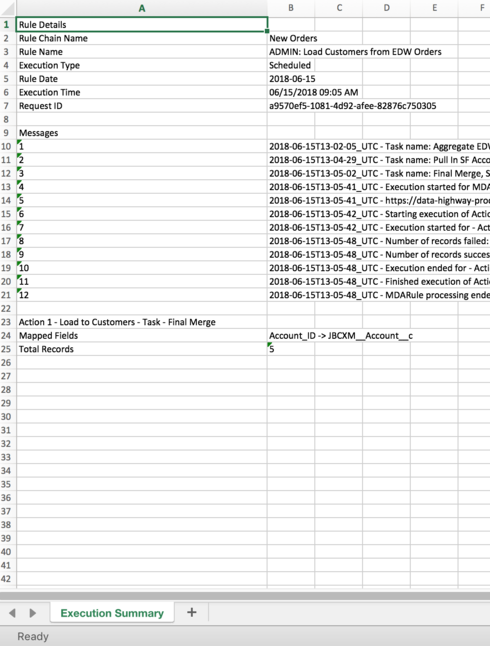 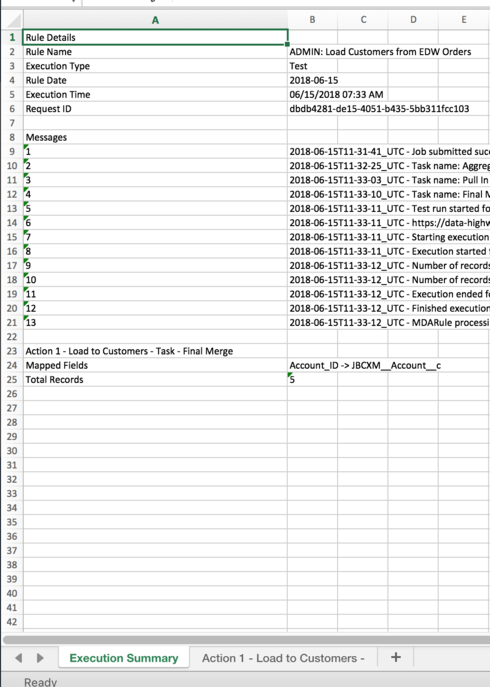 Worse still, the email that comes through doesn't even tell me the number of records from the Action the way a manual rule does: 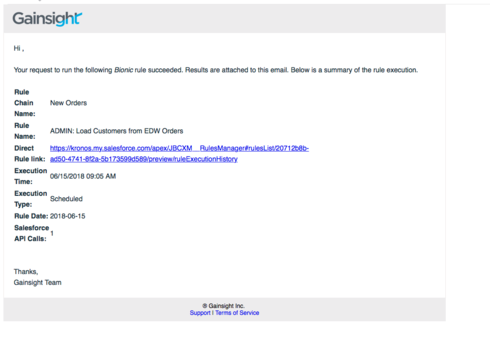 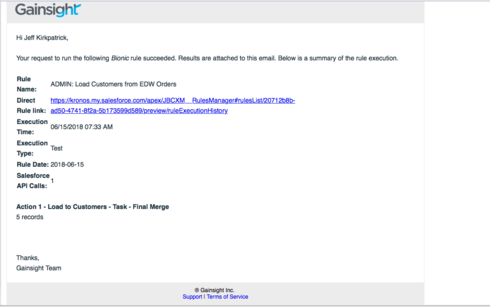 This increases the level of effort required to monitor/troubleshoot.
Jeff Kirkpatrick

THis is so frustrating.... It's hard to analyze and troubleshoot rules. I've been wanting to post about this for a while now!... So THANKS Jeff!! 😃

+1
FYI, I reported this back in March and I was told it was added as a bug. Hopefully it will be fixed soon enough.

+2
Hopefully VERY soon because I'm afraid I'm going to have to break apart all my rule chains and schedule these rules one by one.
Jeff Kirkpatrick

+1 on this.  Been wanting this for a long time. Makes it impossible in many cases to understand why a scheduled rule within a Rule Chain might have failed without manually rerunning the rule (which may not even produce the same error depending on the nature of the issue -- i.e. a timeout).

+1
Agree across the board!
Cameron Wright - Sr. Enterprise Support Analyst

Sorry to hear this is paining you! I'm checking with our Support team to see if this is being fixed soon or if it's a new issue.
Lila Meyer, Dir. Global Education Services

+2
Thanks for checking into this Lila.  It's a HUGE pain point.
Jeff Kirkpatrick

+2
So it appears that this is the case regardless of if it's in a rule chain or scheduled singularly, and it's by design (I haven't run a singularly scheduled rule in a long time, so didn't recall this to be the case)

Can this get converted to an Idea and placed high up on the priority list?  I feel it very important to include these details EVERY time a rule runs because just because it ran successfully doesn't necessarily mean there wasn't a mistake.  Sometimes you need to go back and find out what a rule did days or weeks later when you find a discrepancy.  WIthout this level of detail it's hard to trace things backward.
Jeff Kirkpatrick

I heard back from Support and they confirmed that things are working as expected, so I will convert this to an Idea.

"The behavior is that for scheduled executions, we won't send the details of rule actions or successful record counts. So the breakup of per action count will not be shown. In case of a partial success, we will show the number of records which failed though."
Lila Meyer, Dir. Global Education Services

When you click on a Rule and go to "Execution History". It shows the execution logs for each execution of that rule.
Does that not help?

+2
Hi Jitin - no it doesn't because the execution logs do not show the results of the ACTIONS in the rule.
Jeff Kirkpatrick

+2
How high can we move this up on the priority list?  Without this capability it makes it very hard to troubleshoot when a rule "succeeds" but didn't process the actions as expected.
Jeff Kirkpatrick

I would love it if the outputs were the same! The output would be very helpful for scheduled runs!

Thanks for posting this! I have this same issue when troubleshooting rules and it would be a great help if it included the action details.

+1
There's one (admittedly awful) work-around, which is to add an Action that WILL fail, then add your email to the rule or rule chain in the "On Failure" section.

Of course, this means you're purposely setting up a rule to fail just to become eligible to receive automated documentation, which is definitely not a best practice, and will give you headaches if you're monitoring your Rules Engine for true failures, since you're essentially creating a false positive.

I too miss this detailed documentation on successful rule runs, but I've just lived with it and scrambled around it when necessary.

+2
Perfect example.  I had a rule fail today that has 6 actions that trigger CTAs.  3 of them failed with an error message " Operation not valid for this user type" but it doesn't say which records failed.

I know what that means, but since the file doesn't include which records were successful so it makes my job harder to have to figure out which records failed.

+2
Can we get an update on whether or not this is on the short term roadmap? It's a major administrative pain.
Jeff Kirkpatrick

Userlevel 4
Agreed! Appreciate the notifications of successful & failed runs, but it'd be so much more helpful and actionable to have this additional level of detail. Thanks!

+2
I just learned from Product this has not yet made it on the roadmap. Disappointing, as it's a VERY large pain point.

+2
Greetings all. I just learned today that Kronos Product team has determined this to be too resource intensive and has not added to the roadmap, which is disheartening as I view this as a fundamental, required administrative need.

@faust_belarmino @scotty @keith_mattes @marcelo @diana_luo @manmeet_dosanjh if you're as concerned about this as I am, you might consider escalating through your Gainsight CSM, as I am doing.

Thanks for sharing this! Yes definitely a concern and one of the big reasons I don't use scheduled rule chains anymore even though they would make my life so much easier.

It is not enabled by default and does require Support to enable for you (I've already requested to have this enabled in my Sandbox!) and it cautions that it could impact system performance, but thought I'd let everyone know it's out there! Thanks Gainsight!

Definitely, we need the option to show the Action Records for the Scheduled as well as Manual Runs.