Note: I honestly thought this was going to be a short post before I started writing... whoops

I was working with one of our Strategic Partnership Managers yesterday to customize a dashboard for her. We were able to create a great dashboard featuring widgets like New Accounts, New users, Weekly active users, and Feature performance filtered down to her relevant subsets and features/modules.

The main problem she was trying to solve was: "How can I proactively know which accounts are at risk?"

She had 2 main requests/pieces of feedback:

1: She wished she could directly access the specific users/accounts/etc from the widgets. Right now, she would have to review the dashboard, then access Accounts Explorer, Audience Explorer, or Analytics>Features>Adoption to find the specific accounts and users. It's great for her to have a snapshot of her accounts, but it's only actionable for her when she can dig into the specifics. I think making it easier to access these specifics would reduce the learning curve for non-Admin PX users who may be less comfortable with data tools in general.

2: Overall, she noticed that the metrics tend to show the "good numbers". She is also looking for ways to proactively see indicators of account dropoff, or to answer the question, "Which accounts are demonstrating poor health/low usage?" There are some ways to go looking for this information, but what we found is that we needed to know which accounts to look at in the first place. Here were some of my ideas:

A way to surface which accounts have had:

In reference to #3 (did users just visit pages or did they actually complete a workflow?), I found a way to surface this information: 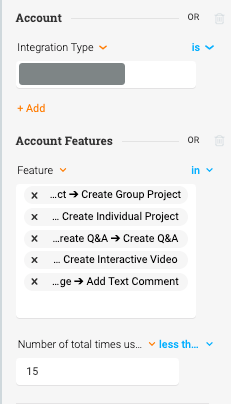 Those filters surfaced which accounts have used the selected features fewer than 15 times total.

I also wanted to see this filter applied to recent activity, not just all-time. I applied the same filters as above to the Adoption view in the Analytics tab.

Overall, I think these requests demonstrate what Account/Partner Manager roles are looking for in data compared to Product Managers.

Any other ideas on how to create indicators of low or dropping usage for accounts?

Userlevel 3
I've been noticing a pattern of thourough report-backs to this community from you, Julie. Thanks for the effort of sharing your efforts and suggestions. I'll be grateful to have access to your work when the time comes for us to try building our own dashboards.

Userlevel 5
Hey Mike! Thanks for saying that. I'm really glad you're finding these posts helpful. When you do get to the point of making your own dashboards, feel free to let me know if you have any questions or would like to brainstorm ideas. Talking to other PX-ers always gets my creativity going!