3 days ago
When I create a support case report and a customer's case volume is low, the X-axis shows decimal notation, but there is no such thing as 0.25 of a support case. (see image)

Need the ability to determine whether or not the decimal notation is contextually applicable and enable or disable where appropriate.
Page 1 / 2
Hi Jeff,

If we automatically detect whether decimals are required based on the available dataset, will that work?

Sumesh
Yes I believe that would work.
Any update on this?  The decimal places look very unprofessional on reports where you are reporting on items that cannot be "half" like Cases, CTAs, etc.
Hi Jeff,

Thanks!
Hi Sumesh - any update on this?
Jeff, let me follow up on where this pebble is. Essentially what we'll do is, the aggregate number will have same decimals as maximum decimals on any entry in the data set being aggregated. does that work?
Thanks Gaurav - could you provide an example so I'm clear?
Yeah an example would be great. In reading your answer, it appears that if the data set has numbers with 2 decimal place precision, then the graph will also have that. If the dataset is all rounded up to no decimals, the graph will also have that.

Can you confirm if this is true of all numeric columns or just the specific column? Also what about count of IDs or Names, that do not have any decimal place precision?
I actually misread original issue, that it's about label of axis.

Ok so in general anything that plotting a count (or count distinct) will always have axis by whole number. If the aggregate is a sum, average, min, max (only available if underlying field is numeric) the axis will be 2 or decimal points of value in that field with most decimals. E.g. if I plot average of ARR across customers, and ARR field has 2 decimals axis will have 2 decimal. But if I plot average age of CTAs across customers, this will whole number since age is calculate in days, not fraction of days. Of course if it is count of support cases by (anything) will always be whole.

For bar, column charts, line you can only plot 1 value, so the X or Y axis. For scatter charts or bubble charts you can plot a value each on X and Y axis, e.g. average of AGE maybe on Y axis and average of ARR can be on X axis. So Y axis is whole, where X axis is 2 decimals. Makes sense?
Hi Gaurav, I don't think your explanation with respect to CTAs is accurate. Please see the attached image 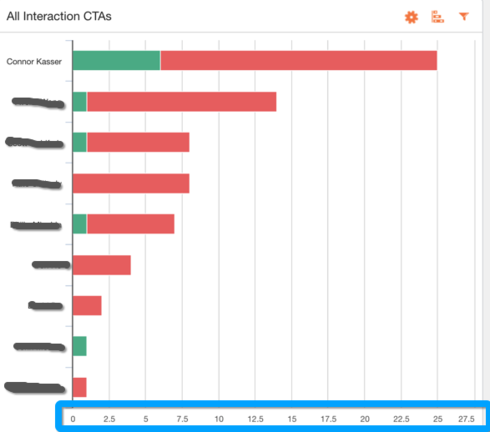 Yep. My explanation is the proposal I'll get engineering to work on, not today's behavior
Understood. Thanks so much
This reply was created from a merged topic originally titled Only display whole numbers in bar chart graphs. We don't have half customers :).

I've recently made a handful of new reports/dashboards to track customers in different stage's. The bar charts are displaying 1.5, 2, 2.5 etc... which seems odd. We are tracking customers stage - so there should not be and half increments here. It looks as though it happens when the scale of the report is under ten. For the comparable reports that have a scale bigger than 10, the half increments vanish and whole numbers are used. For consistency sake looking at the reports, it would be AMAZING to just have everything in whole numbers!   Can you share a few examples of why someone would use half numbers in gainsight?  I'd love to hear a few ideas!
This is planned for Q2 / Aug release
Was this ever released?  I see a "Display X Decimal Places" option but if that is intended to give me the ability to restrict the decimal functionality it doesn't seem to be working....

Bump.
The above issue has been taken up for Spring 2017 release. The idea is to present decimals on axes ONLY when the measure represented on the axis has decimals. If the measure is a whole number, then represent the axis labels using whole numbers only (so in case of CTAs /Cases closed, which is a whole number, you will not see decimal labels).
We're seeing this again in some of our reports (half of a service?)  Anyone else?
I'd like to bump this post as well.  I understand that this happens based on fitting the data into the report UI in an attractive way, but it is inconsistent based on the amount of data shown in a report, and can definitely be deceiving when trying to look at data where there are no decimal values to report.
Anyone paying attention to this thread?

Example as of today: 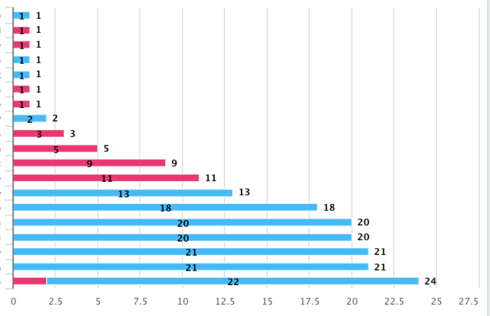 1) Jeff's chart is laughable at this point with the feature "working as expected". Cleaner is not what I see there.

2) I edited out the added decimal places from our chart we're seeing this with and I am 100% okay with the spacing. Extra white space has never seemed to be a concern any where else in the app. 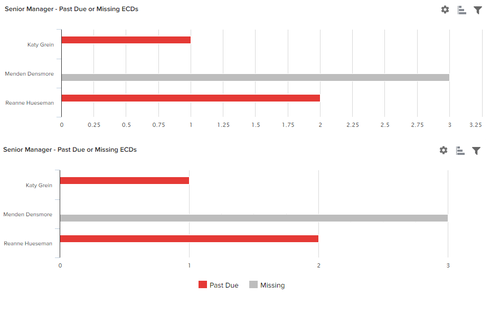 Completely agree with you Melissa, and thanks Leanne for your comment as well.

Gainsight - Please address this asap because it really impacts credibility of the tool to put reports like this in front of CSMs or Executive Leaders - not to mention customers.
Sorry for the inconvenience Jeff. We will take care of it and ship it in a patch with in winter timeframe.

PLEEEEEEEASE fix this Gainsight.  I was just on a call with leadership demo-ing a dashboard and it's so embarrassing! There is no such thing as .75 of an account!