18 days ago
In Salesforce you just separate values with a comma when using Includes, but it doesn't seem possible in Gainsight. Instead, I have to have a separate filter for each value I'd like to include which complicates the advanced logic string when I should be able to just include them in a single filter.

For example, I want to deliver an email variant based on country. If it's not a picklist, I have to write:

Instead, I should be able to write

In this example, it's quadruple the work for each template that has this filter; add on any additional filtering and it becomes cumbersome pretty quick. Is there any way to include multiple values when the field is not a picklist? I've tried contains, comma, comma and a space, semicolon, semicolon and a space, and Gainsight converts it to = after saving (ie, Country = ('USA,UK,AUS,NZ') ), but it does not work.


Page 1 / 1
Could you press enter after entering each string value ?

That also results in converting it to = and the preview will not load, which I've discovered happens when filter logic is invalid.

This would also be great for Reporting and rules engine 🙂

You need to press Tab. See the release notes from April. https://support.gainsight.com/Release_Notes/Recent_Release_Notes_by_Theme/Catch-up_on_Reporting_Enhancements#April_2019:_6.2_Release

That appears to only work in Report Builder. Any plans to build this into email variant and rules engine filters?

@grace_tester_919 that should help you with reporting, though!

Works for Rules, too. Here is a flter in a fetch task.

I don't know off hand about email variants...I suspect it works there, as well.

My mistake on rules engine.

I tried in Variant Filters, it does not work there 😕 it acts the same as Enter and doesn't highlight/separate the entries as in your example. It then converts to EQUALS after saving. For some reason I'm getting an error in trying to upload images to Community today so I'm not able to share what it looks like.

I am seeing a slighly odd UI behavior but the basic funcitonality is working for me.

Here it is after saving

Which I guess is what you were saying @kelly :)

@nitisha_rathi @farhat_mirza Please look at the UI for includes on email variant filter.

Thanks Karl. Yes, that is how it behaves for me, but the actual filtering doesn't work.

See below, I have participants with the Region US or Canada. I try both Enter and Tab for includes, and the Preview is blank. The only time I've encountered the preview not to render is when there is something wrong with the variant filter logic.

In the second sample, if I break the regions out to two different statements, the preview then renders. 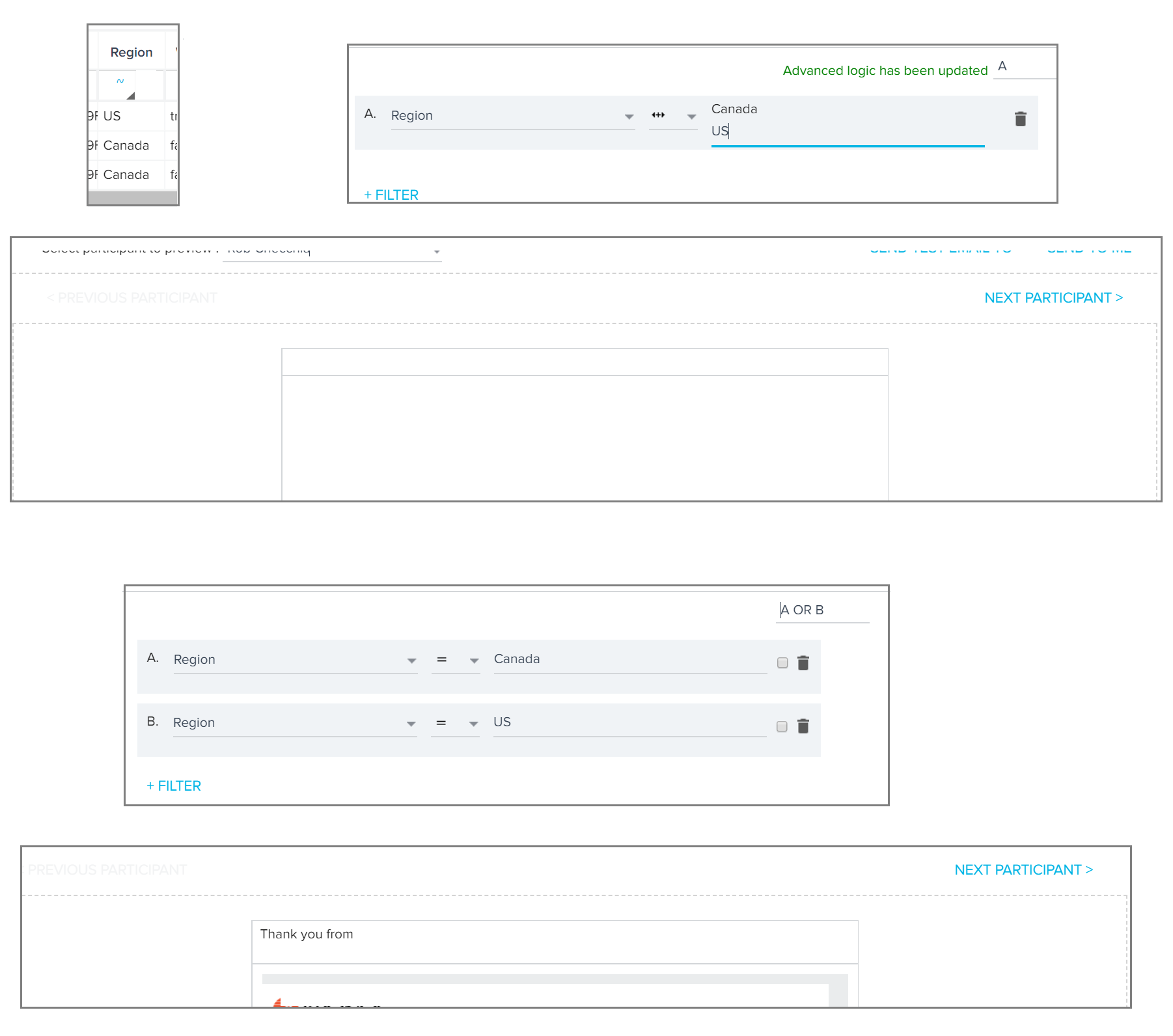 For the Rules Engine, for some reason Includes is not an option for me for that field so I can't test it there, but maybe that's a setting on our end somehow, I will check with our Admins for that.

I would envision that this would work similar to how Salesforce reports allow you to just enter a ',' between values, even if it's '=' or 'includes'.

This would be much easier than adding the field each time then editing the filter logic to OR.

@kelly It looks like the difference is between Salesforce objects vs MDA objects. I am not sure why there is a difference here but not in reporting. @swaroop_badam or @jitin_mehndiratta can you explain?

I tested it with a multi variant template and the moment I apply a formula to a variant with the include operator, I don't see any of the template text in my previews.


We couldn’t take this up due to other priorities. But it is definitely part of our roadmap.

Thanks for your honest reply!

This appears to present itself in other places, not just variant filtering. I can also not use ‘includes’ in a string field when using calculated fields on a conditional wait step. Any chance this is going to be picked up again ?

Actually, when we used “Includes” in Program Variant filters it is converting it to “=” equals after saving the condition.

Screenshots for the same

After saving the filter condition.

I also cannot use ‘includes’ for string fields in query builder - in an attempt to exclude poor data quality from entering a program, I am attempting ‘does not contain’ multiple values, and it does not work.

Any update on when this will function similar to Salesforce, separating multiple values by comma/semicolon/tab throughout Gainsight?

Any update on this?

I’m curious too, as this is a nice articulation of a problem I didn’t previously have a good way to describe.