1. We need a true NPS calculation.  The way Survey's does this currently, it takes the average of responses across a Customer and gives you a 0-10 score.  However, NPS should actually be %Promoters - %Detractors.  "The current NPS 0-10 score is misleading" (direct quote from a customer).

2. For the Widget in the Summary Section, it would be nice if we could add a time option for it.  Allow a customer to choose if they want the true NPS calculation (which we create from above request) to represent ALL Time, Last 30/60/90/180/365 days, etc.  This way, they can truly reflect what they consider to be the NPS of the account.
Show first post Hide first post
Page 2 / 2

Userlevel 5
To have this capability we need to have reporting enhancement to support formula fields at column level.

Userlevel 2
Can you customize the NPS meter widget? Your meter says 20 is green. We think 30+ is green?

Userlevel 6
Praneet, I know that customers can now configure the Summary section of the C360 to show actual NPS, as opposed to the score average, if they so chose. 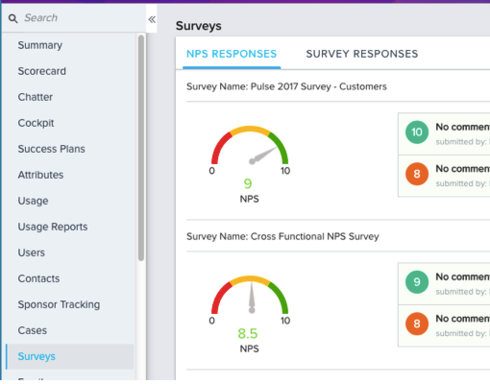 +2
Jeff this is great! I am trying to implement this and cannot seem to find the "NPS Response" object. I tried going to Administration >> Data Management but I am not seeing any objects listed there relating to surveys, NPS, or responses.

Can you point me in the right direction?
-Ben

Ben -- looks to me like you're looking at the MDA objects. At least currently, the NPS Response object I was referencing is in Salesforce. I do know from a conversation a couple of weeks ago that surveys will likely shift to MDA in an upcoming release. Including this as a default feature would be great.

+1
I am adoring this idea. The one change I made is to use -100 and 100, so that the report shows the NPS score as an integer instead of a decimal.

Nice tweak, Seth! I've just been dealing with the decimal point. This is much better! :-)

Since you're throwing around terms like "genius," I think should be sure to give credit to the team at SurveyMonkey who built our Salesforce integration. They're the ones who implemented this and that's where I first saw it.

+1
Mostly I'm beating myself up over not being able to creatively deploy basic algebra
Director of CS Ops & Admin Community, Gainsight

+1
Hi, any plans of making the true NPS calculation available in reporting and analytics with Survey 2.0?

Userlevel 2
This thing has been getting kicked around like a dead cat on the side of the highway.

Was anyone able to make this work?

I am currently calculating overall NPS by spend tier outside of Gainsight in Power BI, but would prefer to calculate this in an Executive Dashboard.

@denise_stokowski @praneet I'm wondering if there has been any movement on calculating true NPS and not just the average or sum of NPS responses in Reports and Dashboards. I think it would be valuable to show NPS on Dashboards and allow for filtering based upon segment, cohort, etc.

@jake_ellis - we are currently developing formula fields for reporting which will allow for this kind of inline NPS calculation. It's a complex problem to solve for, but you'll be happy to know that it's in development as we speak.

+1
@jake_ellis If you expand all the comments on Scott Morris' comment above (beginning, "Totally understand the need to see the true NPS score on the 360."), you'll find a workaround that's available today! If you're skeptical, one of our Solution Architects ( @jessie_brainerd ) was a math major and couldn't wait to prove it out 🙂 See: https://cl.ly/c1758b0e6751

Thanks for you comments!

A column has been added in the to get the True NPS score.

Admins can build a report on True NPS in Gainsight Reports and Dashboards which allows for dynamic filtering categorized by Participant, Company, Region, Product, Segment, CSM, etc. True NPS is a standard field in the application object NPS Survey Response. This field helps admins to calculate True NPS for various segments of responses.

This field stores the value :

To find the True NPS of all the responses that you have filtered, you must apply an aggregation of average on this field.