I am posting this on behalf of a customer that had a question about Survey CTAs.

What they would like to see is the ability to put a link in the CTA that is fired off from the Survey tool that will direct the CSM straight to the survey question so that they may have quicker access to the finer details of the survey response.

This would keep the CSM from having to go through the CTA then navigate to the customer's CS360 page and grab the details from the Survey section of the page.

Do we have any other requests for something like this or have it anywhere on the roadmap?

and then set your notification preferences by clicking the 'alarm bell' 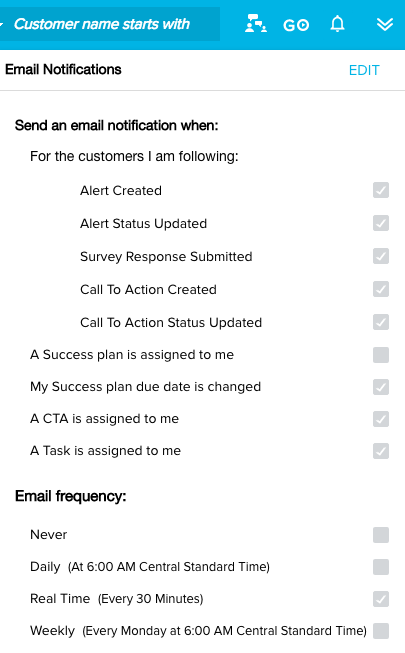 then you will receive updates via email and the email update will have the link to the survey response:

Userlevel 5
Hi Tom,
We already have this feature in current Survey CTA, where user can directly go to Survey Response page from CTA comments section.

Would you be able to provide some clarification as to what exactly this process looks like?

We have a few customers that would like to replicate this process, and they were looking to community for some further information!

Any details as to how this can be completed would be greatly appreciated!

The link Praneet is referring to automatically shows up when a CTA is created by the Survey module, as shown below: 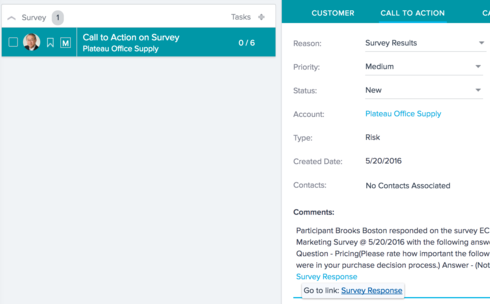 Thanks for the reply. I'm not seeing that in my Survey CTA's...

Could you please check your Survey CTA rule (under Set CTA's sub-tab on the left)? It's likely that the following configuration is set to 'never' post any comments when CTAs are created:

Never was chosen for some CTA's but Once was chosen for others as well yet the link was not appearing on those either. Is it required to have "Make chatter posts for CTAs" turned on under Admin > CTA > General Settings for this link to be available? We don't use Chatter now that Timeline is available so I removed it from the CTA detail view to avoid clutter.

We've had several CSMs ask for this as well.  Is there a setting or something needed to enable this?  I have the CTA set to "Post update to chatter and/or comments:" = Once, 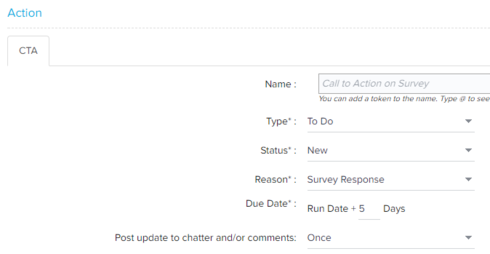 but get no link to the survey in the CTAs. 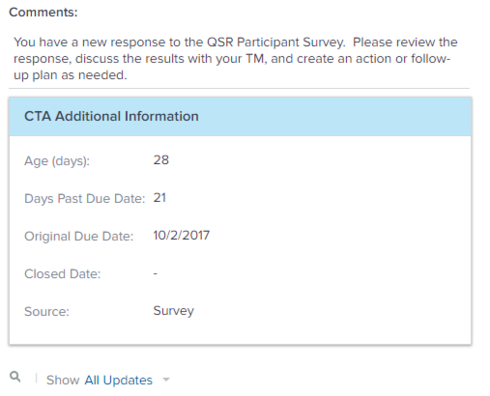 What am I missing?

This doesn't work for CTA's built in the Rules Engine (sadly), only for CTA's built from the Survey module. I thought that Linked Objects would be a way to get around this (using the NPS Survey Response Object), but sadly it did not.

Survey CTA's are a bit more limited than Rules Engine CTA's as far as using merge fields go, but the one plus is that they fire in real time to the survey response coming in rather than wait for the schedule rule time.

The CTAs I created are coming from the Survey module, not the Rules engine.  I do like that they fire in real time, but can't figure out how to get that survey link in there.

Hmm. Strange.. Not sure how else to advise, but here is our configuration and it's working.

Thanks for the examples Brittany!  I got the link to show up by copying your settings, though I'm still not sure WHY.  I've got support trying to figure out if it's the Type=Opportunity that enables the link, or enabling the CTA name to "Include in Identifiers".  (whoknows?)

Hah isn't that (sadly) often the case?
I don't think it's due to Type=Opportunity because our CTA's for passives and detractors are Type=Risk, and they work as expected. Maybe it's the identifiers?
H

Good to hear that its working, let me know if you see any issue.

In case anyone else runs into this, we figured out what was causing the survey links to not work.  We were trying to use the Comment field to provide instructions to the CSM getting the CTA.  If you include any text in the Comment field, the link to the survey will not appear.  So you can either have a Comment, or a link, but not both.  (Wouldn't it be nice if this was clear from the UI, instead of taking investigation from L2 to figure out?)
H

We will plan to add a message in the UI to clear the confusion.

If you'r considering ideas for how to do this, rather than just adding a message, can I make a suggestion?

It would be most helpful and intuitive if the Comment field in the CTA Creation screen of the Survey could be pre-filled with the token-ized text that will actually show, rather than showing as a blank text field.

ie. Currently, if I leave the comment field blank, what shows up in the comment of any CTA created is:
"Participant [Participant Name] responded on the survey [Survey Name] @ [Response Date] with the following answers: Question - [Question] Answer - [Answer] [Survey Response Link]
This survey CTA is associated to [Associated Object] with Id [Associated object ID]."

It would be fantastic if that text was pre-filled, and I could edit it as desired to add additional comments or tokens, or even remove part of that default comment.  I have an internal survey that I'd like to include a link to, but don't really want to include the answer in the Comment, since I don't want everyone on our team to see the responses.
H

I have discussed about the Suggestion with the PM and we are planning to add it in the new Survey 2.0.

+1
@Hitesh do you know if the above feature is already in the roadmap and timelines around this? Thanks!

+1
Adding another use case to this, it would be ideal if we could have tokens for survey link available within the CTA function of the Advanced Outreaches. That would make it much more powerful rather than having to opt for canned response from survey CTA vs limited functionality from AO CTA. Is this something currently being considered?