With many of our CTA's the comments just continue to add on to the CTA, rather than standing alone. It becomes really confusing. For example, we have a CTA for every NPS score that comes in. When the CTA is created we just need to see who the NPS score was from and their comments, but it just keeps adding anyone from the account that has submitted an NPS and what that score was. 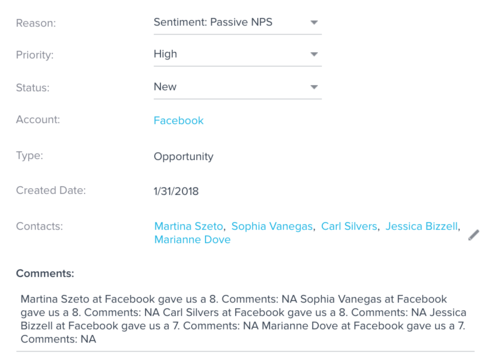 +2
If I am not mistaken it’s because there is nothing unique to identify the CTA so it sees the CTA already exists and just appends to it. Can you tokenize the CTA name in the rule with the persons name or survey response code or something that will distinguish it from CTAs triggered due to multiple responses on the account?

Of course this would result in separate CTAs.
Jeff Kirkpatrick

As Jeff mentioned, you can add contact name in the CTA name and select CTA name as an identifier, if you want to create one CTA per contact.
Alternatively, you can also select "Post comments to CTA = Once" in the rule. This will not append CTA comments with multiple contacts details.

Thank you Nitisha. If I select to post comment to the CTA once. Does that mean it will keep the first comment from the first time the CTA was fired? Or will the comment update to be applicable to what is currently firing?

It'll just keep the first one, since we're telling the system to not update comments each time a new criteria is fulfilled for the same existing CTA (a new NPS response from the same customer, in our case). If you want all the comments to come in, just not in the same CTA, tokenizing the CTA Name is the way to go (as Nitisha and Jeff suggested).